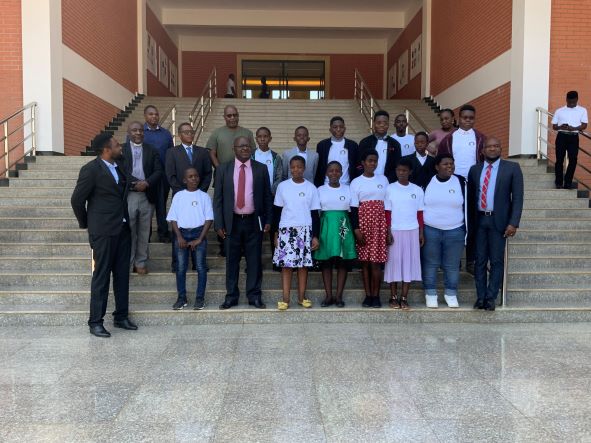 The Vice Chancellor’s Young Engineer Academy at MUST on September 16, 2022 graduated 16 youth drawn from primary and secondary schools across Malawi.

This was the first cohort of the Academy, aimed at preparing children in Science, Technology, Engineering and Mathematics careers at an early stage in line with Malawi 2063 agenda.

Addressing the graduands, Deputy Vice Chancellor, Professor Jonathan Makuwira, said the Academy had demystified the belief that universities are only there for those who pass their high school certificates with flying colours.

“Essentially universities are there to facilitate knowledge and as long as this is relevant, the knowledge should be imparted irrespective of one’s age, gender or level of education. We need to be inclusive and that is why MUST is initiative various projects aimed at imparting knowledge to our students, those not yet in university, community members and the industry players,” he said.

“With knowledge, there will be nothing impossible for our youths or indeed for anyone who is empowered. So I urge you to go back and work hard in your studies so that one day you can come back as MUST students.”

He said Malawi depends on youths for its future but it is only those youths who have the right skills and knowledge that can live up to these expatiations, hence the need to prepare them in advance.

Speaking earlier, one of the fellows, Michelle Gobede said the Academy helped her to interact with female engineers and believes that with this inspiration and motivation, the future holds a lot for her.

“I had wanted to be an engineer and when I saw the call for applications for the Academy, I did not think twice. Of course, I thought we would spend all our time flying drones but we learnt how to build them too. We also learnt about engineering concepts,” she said.

Each of the fellows was given a mentor, an Engineering student from MUST to help them with their raw project ideas and explain some of the concepts for their understanding.

In his speech, one of the mentors, Maziko Mphepo, thanked MUST management for the initiative, adding he wished he had such an opportunity before enrolling for his engineering studies.

“I also thank all the parents who allowed their children to come for this Academy. Thanks for believing in the children that they can apply their minds on such issues as engineering and drone technology,” he said, adding that the children did not just learn stuff but were inspired to learn, meaning they will be able to learn more on their own.

MUST appoints ODel and PG coordinators