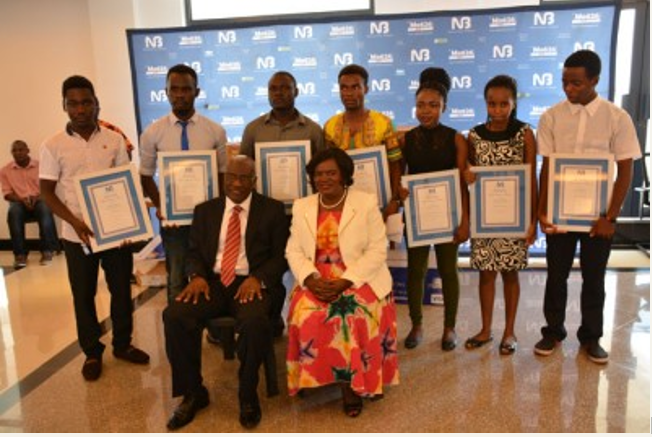 National Bank of Malawi (NBM) on Friday, November 17, 2017 gave out the first best students awards for the Malawi University of Science and Technology (MUST) and recognised and decorated nine students for their academic excellence. Speaking at the event, NBM chief executive officer Mr Macfussy Kawawa said the launch followed an approval by the bank’s board to extend the awards—currently running at University of Malawi and Mzuzu University—to MUST. Mr Kawawa said the inaugural awards are meant to recognise, honour and motivate students to work hard and aim higher to help in the development of the country. “As a bank, we introduced the best students awards in the 1970s at University of Malawi and we have been committed since then. We were approached by the MUST Vice Chancellor to support the university and here we are launching the awards. Every time we are approached by a university to consider introducing the awards, we do not hesitate,” he said. The NBM chief executive officer also announced a donation of computers to MUST which will be strictly used by students in their studies. MUST Vice Chancellor Professor Address Malata thanked National Bank of Malawi for being the first to award best students at MUST. Professor Malata, herself an awardee of the NBM best students award in 1987 while at Kamuzu College of Nursing, assured the bank of a good partnership, first as a university but also through its staff and students. She called on the awardees to strive for excellence in line with the spirit of the awards and the university’s motto of “where excellence reigns”. “Let me be honest with you. The NBM best students award is so prestigious it can win one many opportunities, including jobs. I am talking from experience as a former awardee. So do not hesitate to include it on your CVs,” advised Professor Malata. “We have been following the students’ performance in each academic year and our recommendation of them for the awards is in line with Senate’s approval process. This we do to ensure honesty and transparency in the selection of the winners,” she said. The students walked away with a certificate and K250,000 each, which will be accessed through NBM Visa card. Speaking on behalf of fellow awardees, Talengi Kasambara thanked National Bank of Malawi for recognising and awarding academic excellence. “We promise that we will be the bank’s ambassadors and as such, we will be exemplary both in our behaviour and conduct in line with the bank’s values. I also hope that the awards will make us strive for more and motivate those who have not made it today to worker harder and beat us to the awards next year. Such competition is healthy for us and also for the nation as it will lead to increased competition and more innovations,” said Kasambara. The nine awardees are Ruth Mtuwa (Bachelor of Engineering in Biomedical Engineering), Isaac Maso (Bachelor of Engineering in Chemical Engineering), Jameston Ng’ambi (Bachelor of Engineering in Metallurgy and Materials Engineering), Arthur Mwang’onda (Bachelor of Science in Business Information Technology), Vinjeru Msowoya (Bachelor of Science in Computer Systems and Security), Amos Nyirenda (Bachelor of Science in Medical Microbiology), Francis Kapakasa (Bachelor of Science in Earth Sciences), Kasambara (Bachelor of Science in Meteorology and Climate Science), and Atupele Mwangologho (Bachelor of Science in Disaster Risk Management).

NFB offers scholarships to MUST students