NFB offers scholarships to MUST students 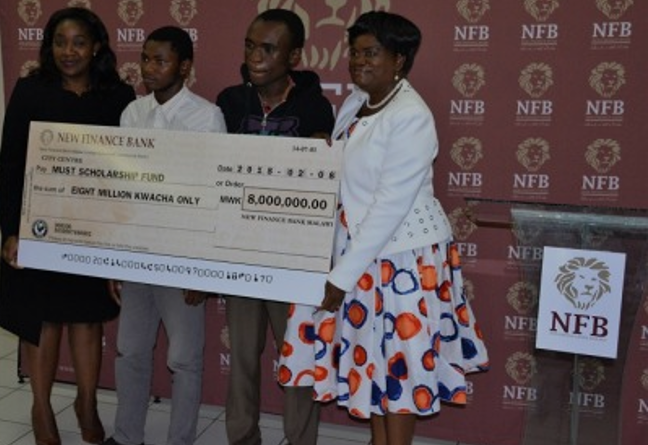 New Finance Bank (NFB) on February 8, 2018, offered scholarships to two needy students at the Malawi University of Science and Technology. A few days later, the bank offered one more student a similar scholarship to bring the number of students under its support to three.

The scholarships are worthy K4 million for each student and will take the learners through their four year study. This makes the total scholarship for the four years K12 million. Speaking during launch of the scholarship fund at NFB Blantyre Branch, the bank’s Head of Corporate Banking Sitabeni Majamanda Malange said they came in to support as a response to government’s call for corporate institutions to complement its efforts in development.

“Government wants partners to ensure that we achieve the Sustainable Development Goals. As a financial technological institution, we were particularly interested to support the area of science and technology which MUST is a leading player,” she said.
“The K8 million [later K12 million] scholarship will be honoured annually until the students finish their studies after four years. For us, it is an honour to support the education sector.”

Majamanda Malange then advised the students that after their financial burdens have been taken care of, all they need to do is work hard in class and demonstrate exemplary behaviour as they are now NFB ambassadors.
“Work hard and make a difference with passion, determination, and creativity.”
In her speech, MUST Vice Chancellor Professor Address Malata hailed NFB for coming to the rescue of students, two of whom are Michael Hauli and Lloyd Manda.
“There are many students who are struggling financially. However, we are happy to see many people coming to support. We even have some restaurant owners who are offering needy and hungry students meals. Some students are supporting their needy colleagues,” she said.

Professor Malata said as a mother, she decided to go out of her way to seek support for needy students because she want no student to withdraw from the university due to lack of fees.

“These are very bright students and the hope of their families. We need to support them to realise their life goals. This is why I look at NFB’s support as not only going to the two students but to Malawi as a whole because once they graduate, these students will contribute towards the development of this country,” she added.

She narrated how some needy student cried when he missed the NFB scholarship following interviews and called on more well-wishers to come in and support.

It is this boy that compelled NFB to increase its sponsorship to cover three students.

Professor Malata said banks can support the university in many ways than just offering scholarships.
“As MUST, we believe in doing business unusual. As such, we have established centres of excellence in entrepreneurship and science and technology. So banks can come in to offer internship openings but also provide capital for establishment of businesses among students. For example, students can team up and establish a cleaning company and we can engage them to do cleaning services on campus. In so doing, we will be empowering them,” she said.

Hauli promised to work hard to realise his dream.

“Now that I am assured of school fees and meals, I can only dedicate all my time to studies. The bank’s spirit has inspired me to also support the needy when I graduate and become independent,” he said.