Mwayi Yelewa: The First Class Female Engineer at MUST 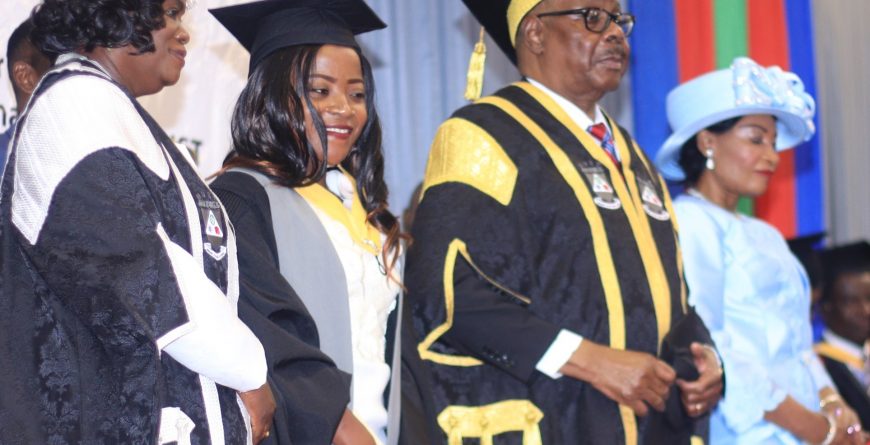 When she joined MUST in April 2014, she was among 9 percent of the girls that had been selected to the Malawi University of Science and Technology (MUST). The low number of girls in this group was attributed to the fact that most girls shun sciences as they are brainwashed to believe that sciences are too tough for them.

Mwayi Yelewa might have noticed this imbalance and as if on a mission to prove that this is only a myth and to beckon other girls to go for sciences, she was the only girl among the 120 plus students selected that year to get her Bachelor of Engineering (Honours) in Biomedical Engineering degree with a first class. In fact, there was only one make student who matched this feat.

With this achievement, Mwayi etched her name in MUST’s annals of history as the first female to get a first class in all of the university’s engineering programmes and the first female student to achieve this under the Malawi Institute of Technology (MIT), one of the four school at MUST.

In humility, Mwayi claims she never expected to get first class although it has been her uncle’s desire to see her excel and be at the top of her class.

“The encouragement from uncle motivated me to never look down upon myself because he was able to see that I have the potential to do it. Although I did not see that potential myself, I believed in his encouragement,” she said in a recent interview, adding that when she got the results of her final year examinations, she could not believe it. “But it made me really happy.”

Yet those who know her from her secondary school days at Providence in Mulanje and at MUST, say that Mwayi’s achievements are not surprising. According to them, she has always been brilliant and has previously won several awards for her academic excellence.

Her background does not give much for a successful student.

“I was born at Holy Family Mission Hospital in Phalombe 3rd July, 1997. I was unfortunate to have lost my mum in 2005 but that meant going to stay with my uncle and his family who raised as their child.

“My primary school journey began at Likanani School in Mulanje in 2002. After my mother’s death, I was enrolled at Providence Primary Boarding School, where I wrote my Standard 8 examinations and got selected to Providence Girls Secondary School. With my good grades during MSCE, I was able to join the Malawi University of Science and Technology,” she said about her education background.

Interestingly, from her secondary school days, Mwayi had two ambitions; to become a medical doctor or a mechanical engineer. Since MUST’s call for applications for selection came earlier than the other public universities, Mwayi did not want to take chances.

“MUST attracted me because it was offering engineering programmes, which was one of my areas of interest. I really wanted to do a science programme because I believe that girls are good in sciences only that people have been made to believe otherwise,” she said.

For her, science was interesting and easy because she takes it as part of her life.

“Everything that is around us is science. For instance, in our day to day lives, we play netball or football which requires the players, even unknowingly, to apply specific amount of force to the ball for it to reach the next player within a specified period of time and at a desired height.

“And just because in class you do the same things with actual calculations does not make it different. For me, I found the calculations exciting as I was able to relate them to what we used to do and that made me eager to know more. That helped me to always get good grades in sciences,” added Mwayi.

Despite this, Mwayi said her Biomedical Engineering programme was never easy as others may want to believe, saying there were times she would be in class for over two hours and come out without understanding anything.

“Maybe the difference is that while others would just be complaining, in my case I would go and ask some of my colleagues for help. Some of them were helpful but others refused to help me because they believed that I was bright enough to understand the stuff or that if they teach me, I would do better than them.

“Another challenge was being in a class with fewer girls than boys. I was being underrated by male colleagues that a brilliant idea cannot come from me. At first I used to worry about it but I then took it as an opportunity to show them that I can do it as well and even better,” Mwayi explained.

After celebrating the achievement, Mwayi’s eyes are now focused on seeking opportunities for further studies and finding time for innovations, especially in medical device designing. She believes her dreams can only come true if she joins the academia and become a lecturer or a researcher.

Mwayi would love to see more girls excelling in sciences.

“Fellow girls, I am just a human being like you and the fact that I have achieved something means you too can do it. Just set your goals, be determined and put God first in everything that you do,” she advises, adding that her happiest day at MUST was when she was awarded for being the most hardworking student in in the 2019 class.

She also lists the day she lost her mother as the saddest one in her life.

Mwayi agrees that being pioneer students was a challenge as they came at a time when MUST had basic resources.

Her advice to MUST and other universities is to work towards matching industry requirements with what is offered under the various academic programmes. She is also thankful to God for the guidance and mercies, guardians for the support, the Higher Education Students Loans and Grants Board for the tuition fees, “which I am going to pay back soon so that others can also benefit”.

MUST alumna shortlisted for Africa Prize for Engineering Innovation