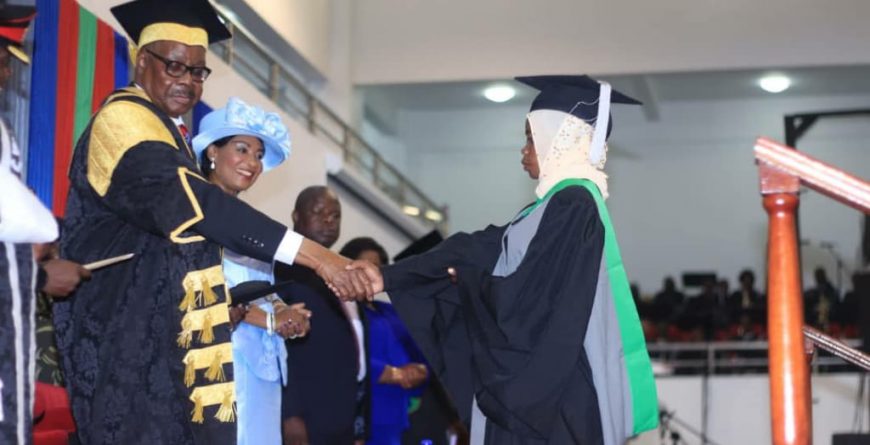 As far as Enelesi Nsamila, 22, is concerned, females are equally good in sciences, if not better than their male counterparts. Her assertion cannot be doubted as she was the first female and only student to graduate with a distinction from the first cohort of the Bachelor of Science in Earth Science programme at MUST. Of course, overall, she was one of two females out of three students that got distinction/first class among the about 200 students that graduated at MUST on November 5, 2019. The others were Peter Mwambananji and Mwayi Yelewa, both from Bachelor of Engineering (honours) in Biomedical Engineering.

Enelesi, who enrolled for the Earth Science programme following her love for Geography and other sciences, says most girls struggle in sciences because they lack focus.

“Girls are intelligent but focus becomes a problem, especially when they attain puberty. They are not sure of what they really want in life and this affects their performance. Otherwise sciences are not different from any subjects. All they require is concentration and focus,” she said, adding that choosing the right circle of friends, commitment and time management are also key.

Despite getting good grades since her first year, Enelesi did not expect a distinction “although I was craving for it”.

She says her academic life at MUST was not easy to the extent that she doubted if she would realise her dream of getting a distinction.

“The programme was tough and I experienced several challenges along the way that affected my studies and consequently my performance. The most outstanding ones were examination pressure, stress and depression, poor study management and financial problems.

“Although life was tough, I did not lose my focus. I continued to work extra hard and finally I made. I got the news whilst in office at Keza Office Park but I stood up, jumped in celebration. I made a Sujood (bowing down). My workmate, Maria Dzauka, was surprised,” said the CAMFED employee of her joy after receiving her examination results.

Born in November 7, 1997 in Blantyre, Enelesi is a second born and only girl in a family of three children. She does not know much about her life in Blantyre because her family migrated to Mwanza when she was only two.

The only one among her siblings to complete primary school and make it to university, Enelesi dis her primary school education at Mphande in Mwanza from where she was selected to Mwanza Secondary School in 2010.

Her life in secondary school soon turned upside down following a road traffic accident that left her father paralysed and unable to fully support her education.

But as one door appeared to close in her face, another one opened as she was put under a Social Welfare bursary.

“In 2012, I received best student award from Red Cross and this motivated Campaign for female Education (CAMFED) in Malawi, which was sponsoring girls at the school to take me on board. I wrote my MSCE examinations in 2014 and got good grades in Science subjects and this is what motivated me to apply for science programmes. I applied for Bachelors of Science in Earth Sciences at MUST and was fortunately selected. Fortunate again, CAMFED Malawi extended the scholarship to cover my university education,” said Enelesi who aspires to work in research and academics and believes that further education to masters and then PhD level will help her to realise this dream.

Having seen it all, Enelesi would like to use her experience inspire and motivate more girls to go for higher education and enrol and make careers in science related areas.

“First and foremost, girls need to change their mindset and perception of sciences. It’s high time they developed an interest in sciences and challenge themselves to go for them. I am an ordinary girl like most of them but because I believed in myself that I can do well in sciences, here I am with a distinction in a science programme. If they wanted evidence that girls can do well in sciences, they need to go any further,” she said.

Enelesi believes that with females being in majority in the world, any meaningful development can only be achieved if they play an active role in it.

“With science and technology shaping most of current and future development agendas, Malawi and the rest of the world can only attain sustainable development goals if girls are not left behind in sciences. Girls should be competitive and be ready to move out of their comfort zones and go for sciences.

“For instance, Earth Science which I studied is important for our national food supply through identifying ideal growing areas and conditions as well as monitoring soil quality. Whether you consider the oil and natural gas that fuel our growing hunger for energy and manufacturing, mining for structural metals for infrastructure or precious metals for use in high-tech devices, it’s all about Earth Sciences and as girls, we cannot afford to sideline ourselves from such critical activities,” said Enelesi, whose happiest time in life came in September 2015 when she first walked the corridors of MUST. Her saddest day was in July 2011 when her father was involved in an accident that left him paralysed.

As somebody who comes from a humble background, Enelesi disputes claims that poverty leads many students into failure.

“For me, there is no relationship between poor performance and poverty. If anything, I think poverty should actually drive one to work harder in class so that they can do well and change their fortunes in future,” she said.

“I know that girls are motivated when they see a fellow girl who has achieved something in life. From my MUST days I was in my small way empowering secondary school girls to aim higher in life by gunning for university selection. Now with my modest achievement, I want to meet many girls and act as their role model

“My working with CAMFED offers me a good platform and I am planning to have a project in collaboration with CAMFED and other interested organisations to reach out to rural girls who have never thought about their future beyond primary or secondary school or marriage. The aim is to have them change their mindset and aim higher in life, mostly focusing on sciences. I think in so doing I will be contributing to national development,” Enelesi said.

She also urged parents, guardians and all Malawians to provide a conducive environment for the girl child to take control over her destiny through education.