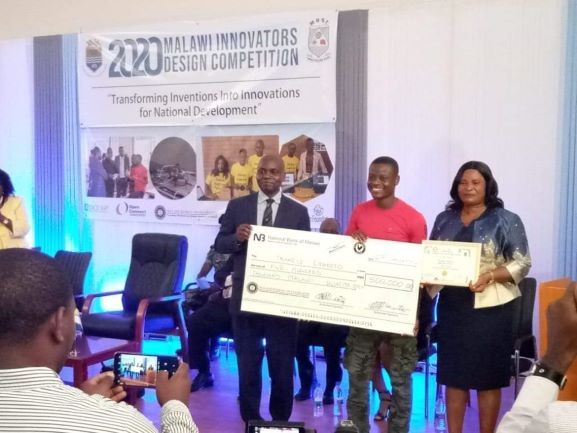 The Malawi University of Science and Technology (MUST), once again hogged the limelight by scooping first and third position at the recent Malawi Innovation Design Competition (MIDC) held at University of Malawi’s The Polytechnic. The university was also declared the best exhibitor.

MUST also produced winners during the same competition last year.

This year, Francis Chimoto scooped the first prize with his Frata duster innovation, which he designed together with her former classmate Talengi Kasambara. The two were part of the first cohort of students to graduate from MUST but designed their duster while students at the university.

According to Chimoto, the Frata duster is different from dusters currently on the market in that it removes stains on the board using a fluid that is kept in a small tank inside it.

“It has a tank that stores the fluid inside and through a point of refilling, you can always refill the fluid once it is finished. There is also a button that is pressed to move the fluid from the tank to the top layer of the duster,” said Chimoto of the innovation, adding that this makes the Frata duster wet and easier to remove stains that remain on the board.
He said they joined the MIDC last year following a social media advert in November 2019.
The Frata duster brushed off competition from over 200 entrants to emerge winners, according to the organisers that comprise staff from MUST and The Polytechnic.
“I heard that from the over 200 entrants, they shortlisted 25 that finally competed. As part of the entry requirements, we sent a video of a working prototype for the judges to understand the workings of the innovation.
“On the day, two groups of judges came and I explained everything to them. They were clearly impressed as I was able to demonstrate the difference between Frata duster and those currently on the market. And when the guest of honour, who is also the Minister of Labour, Skills and Innovation, Honourable Martha Lunji Mhone Chanjo came, she visited only my booth in a room where we had eight innovations,” said Chimoto, who received a cash prize of K500,000 for his innovation.
Chimoto, who is currently one of the scholars under MUST Innovation Garage of the Centre for Innovation and Industrial Research (CIIR), said the award was an achievement and encouragement.
“The award has brought a great celebration in my life. It was a beautiful moment seeing guests congratulated me with others asking to take pictures with me. Our Vice Chancellor, Professor Address malate was also there and I was happy to see excitement on her face. We obviously made her proud,” he said.
In a separate interview, Professor Malata said it was exciting that the university’s students are winning many innovation competitions, citing students who have won awards in other competitions.
“This shows that we are living our motto of ‘where excellence reigns’ and that our students are able to put into practice the knowledge and skills that we teach them. This is what will distinguish us and even the students from their colleagues out there. As a university, we are doing all we can to create an enabling environment for innovation and technology development,” she said.
Meanwhile, Chimoto says he is working on the final product to commercialize the innovation, which he believes can compete favourably on the market in Malawi and beyond.
“The MUST Innovation Garage has really helped us to have an innovative mind which will benefit this project. When we recently went for coaching at MUST under the innovation garage, we were empowered to start building a good duster that people can use. Although it was tough to do since we were using our own funds, we thank God because we still managed to have a duster that was well built,” he said of the duster prototype that he polished at the Polytechnic Design Studio which MIDC uses.
Richard Chilipa, a lecturer in engineering and one of the MIDC organisers from MUST, said the competition was established in 2017 and is funded by Lamelson Foundation under Rice 360/NEST project.

“As MUST, we joined and became part of MIDC in 2018. The competition has been held annually since 2017 and we plan to keep it as an annual event. We normally draw young innovators from across Malawi regardless of level of education because our aim is to give innovators an opportunity to demonstrate and pitch their ideas to the industry. We have been lucky that our judges come from different parts of Africa and the US and they provide useful global insights to the innovators,” said Chilipa, adding that MIDC this year had industrial partners such as Escom, Egenco, Malawi Bureau of Standards (MBS) and Open Connect Limited. MUST and The Polytechnic are the co-organisers.