MUST student nominated for sportsman of the year accolade 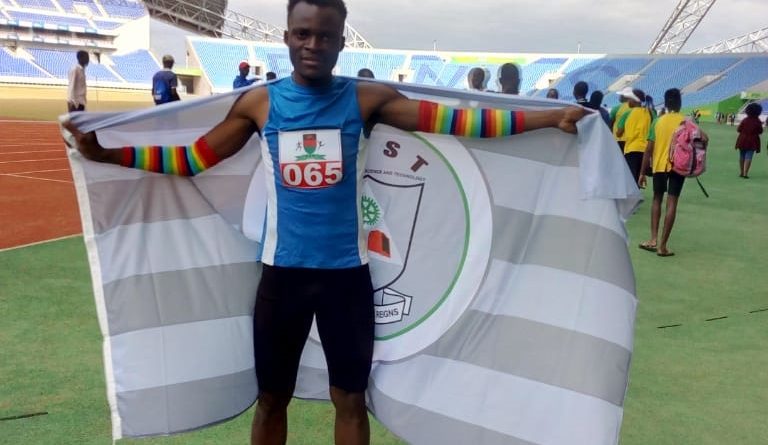 By James Mphande
International athlete and Malawi university of Science and Technology student, Stern Noel Lifa, has been nominated for the 2019 Malawi Sports Awards’ sportsman of the year category.
Lifa, who has represented the country in athletics, especially 100 and 200 meters, will have to battle it out for the award with the likes of Premier Soccer League current leading goal scorer and Orlando Pirates marksman Gabadinho Mhango, and Taekwendo’s Yamikani Guba.

This follows the recent release of names of the nominees by Malawi National Council of Sports (MNCS), organisers of the awards, where China based Malawi national women football team captain Tabitha Chawinga, female athletics star Doris Fisher and Queens netballer Takondwa Lwazi are also competing for the sportswoman of the year award.
Malawi Paralympic Committee’s James Chiutsi, Susan Namangale of Chess Association of Malawi and Association of Draughts in Malawi’s Suzgo Nkhoma will compete for the sports administrator of the year award in the same competition.
Although MNSC has not clearly explained the strengths of the nominees in their respective category, in an interview Lifa said being new and breaking some records along the way, made him outstanding. Lifa is only 18 months old in serious athletics.
“In 2019 I was number one in Botswana during Gaborone international meet (B category despite this being my first international competition. I also broke the Malawi national record at the same time closing the finishing line with 21.75 seconds.
“I also won three gold medals during the national track and field in June, one for 100 meters, another for 200 meters and the final one for long jump,” said Lifa of some of his achievements that might have won him the nomination.
Lifa also participated in the All Africa Games in Morocco where he emerged number five in his heat and in so doing breaking the Malawi 100 meters record by clocking 10.79 seconds.
“In 200 meters, I ended up on position four in a heat of eight athletes. During this race, I also broke my own previous record of Gaborone by reducing the time from 21.75 seconds to 21.31. After analyzing the performance of all athletes who went to Morocco, I was chosen as Team Malawi flag bearer,” said Lifa who also participated in the World Championship in Doha, Qatar, where he came out third in a 100 meters heat of eight athletes and in the process breaking his own record of Morocco, by reducing the time from 10.79 seconds to 10.72.
“It means this year alone I have broken both the 100 metre and 200 meter records, which were set by Eston Kaonga in the 1970s. During the Blantyre City Marathon, I helped my team to win gold medals in 100 meters and 400 meter relay races. If you notice, I am improving all the time and the future looks bright.”
Lifa said the nomination is both existing and encouraging as it meant that he is in the top three of male sportsmen of all Malawian sports codes combined.
“Another exciting thing is that in my category, I am the only one who is Malawi based as Mhango plies his trade in South Africa and Guba is UK based. I have to be honest that while my fellow nominees probably only concentrate on sports, I have to combine it with very demanding studies here at MUST and it is not easy,” he said.
Lifa said he wants to use his exploits in sports to encourage fellow students across Malawi to realise that it is possible to combine sports and education.
“I am a living example of this possibility. The most important thing is time management. What I have noted is that around 75 percent of athletes from other countries are actually university students but here the thinking is that one has to choose one between sports and education, no they can be combined. If you are blessed in both, combine them because choosing one will be a misuse of God’s gifts,” said Lifa, adding that sports is nowadays also opening opportunities for further education through the many scholarships some institutions of higher learning are offering.