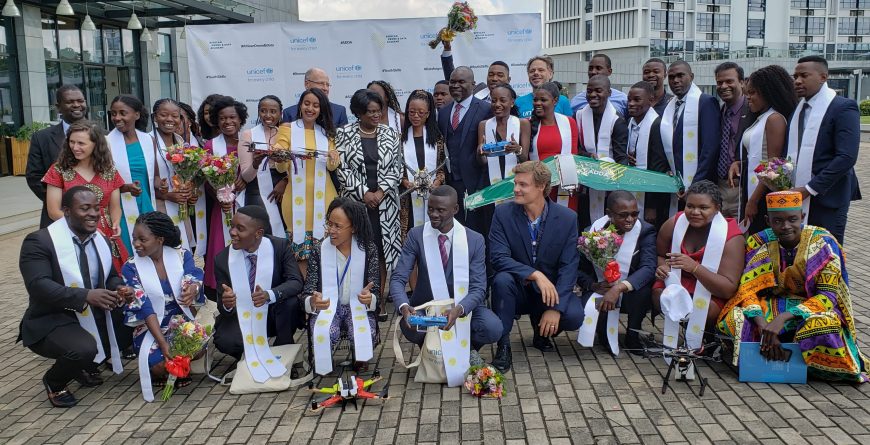 The African Drone and data Academy (ADDA) on March 18, 2020 graduated its first cohort of 25 students drawn from eight African countries, including the host Malawi.
The graduation ceremony organized by ADDA funders Unicef in conjunction with Virginia Tech and Malawi University of Science and Technology (MUST) took place at Bingu International Convention Centre in Lilongwe. The ADDA is initially housed at Daeyang University campus in the capital city in line with current drone corridor specifications.
Speaking on behalf of the Malawi Government, Acting Director of Civil Aviation, James Chakwera, who was guest of honour, said the Malawi government is aware of the many areas drones can support its efforts hence its full support for the ADDA.
“The drone technology is here to stay and it is covering many areas in terms of its usefulness and application. For us in Malawi and Africa, probably what we lack is the technical expertise to make and utilize this technology. As such, the coming of the ADDA will bridge this gap. Most of these graduates today are probably the first ones in their respective countries to be trained in drone technology,” he said.
“As government we also appreciate the various threats that drones pose to manned aircrafts and people and violation of privacy of individuals hence we are cooperating fully to create an enabling environment through legal framework so that we address issues of threats.”
Chakwera also urged the graduates to continue learning around the subject of drones to improve and distinguish themselves as experts.
“You most likely did not learn everything so continue learning. Maintain contact with ADDA to share your experiences on the ground because it is through your feedback that the ADDA can improve on its delivery. Back home, also teach others so that we have more people knowledgeable in drone technology,” said Chakwera to the graduates who came from Malawi, Sierra Leone, Nigeria, Tanzania, Kenya, Botswana, Democratic Republic of Congo and Uganda.
On his part, Unicef Malawi Representative Rudolf Schwenk said the graduates are now equipped with cutting edge technological knowledge on drone operations, adding this is in line with his organisation’s vision of empowering the youth to be prepared to deal with challenges posed by this dynamic world.
“Young people can fully participate in the affairs of their communities, countries etc if they are empowered and various technology developments emerging, we need to empower our youths with the right skills and knowledge and this is what ADDA has done in relation to drone technology,” he said.
He said there is considerable demand for drone technology in Malawi and Africa especially in health and humanitarian sectors but the major challenge was lack of skills for people to apply and utilize the technology.
“As such, the ADDA has come to bridge this gap. The curriculum was specifically tailored for the challenges in Africa but we will not limit ourselves to this because we can do more. We need more partners both private and public sectors players to support the initiative,” he Schwenk said, adding that ADDA is currently funded by the Global Fund, Unicef Sweden, GTZ, Unicef Scotland and Unicef Ireland.
Speaking earlier, MUST Vice Chancellor Professor Address Malata congratulated the graduates for being pioneers for the ADDA.
She also thanked institutions and individuals that collaborated to ensure the first cohort was a success.
“MUST is a young university but through these partnership, we will realise our vision of being a global player. Already we are talking about students from eight African countries graduating today. And this being the first of its kind training in drone technology in Africa, we are very proud of our achievements,” she said.
Even the graduates were excited.
“Access to healthcare in the refugee camps is a challenge. When children in the camp suffer from common illnesses like malaria or when there are outbreaks of diseases like cholera, I can use drones to shorten response time and save lives,” said Theodore Kamunga, originally from DRC but living in Malawi as a refugee.
“Innovative technology is a problem-solving tool, which is very important in today’s world full of new, emerging problems. I want to use the skills and knowledge gained in ADDA to come up with innovative solutions to solve forestry problems,” said Tadala Makuluni, a Malawian.
“I am passionate about artificial intelligence (AI) technology to solve agriculture, environment, climate change and healthcare problems in Botswana and Africa. I plan to join a project that is incorporating the use of drones to continuously monitor and control elephant movements in the Kavango-Zambezi region,” said Thamelo Makati from Botswana.
“I would like to explore the use of innovation in transforming the agriculture sector in Tanzania and beyond. Through drone technology, I will be able to collect data and use the information to improve farming systems and production,” said Emmanuel Nasolwa from Tanzania.
The ADDA opened its doors to this first cohort in January this year and the students had 10 weeks of study. At the end of the day, they went away with three certificates in various areas of their training. Some of the certificates were the first of its kind to be issued outside of the United States.

MUST joins in IWD commemoration