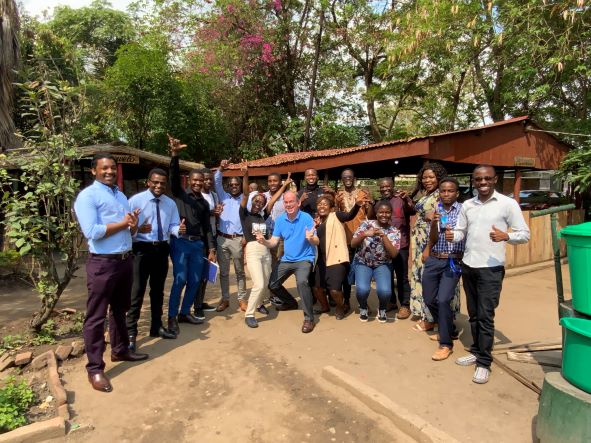 American Ambassador to Malawi, His Excellency David Young on November 16, 2022 met and feted a team of 12 students from the Malawi University of Science and Technology (MUST).

This is the team of students that recently won the African region Cyber 9/12 strategy challenge where the university’s three teams scooped first, second and fourth positions of the eight available spots.

Addressing the students in Blantyre, Ambassador Young said they might have been champions on cyber security as students but they needed to work harder so that they can also conquer the region as professionals.

“Have your dreams, pursue them, be open minded and never give up. There are many opportunities in this world for those who are focused,” he said.

One of the students, Jimmy Phiri, asked the American envoy to help them with information that would lead to scholarships or any other opportunities for knowledge exchange with cyber security experts in America.

“We might have been champions in the region but generally speaking, Malawi and the region are way behind when it comes to issues of cyber security and technology. As such, exposure to advanced technologies and experts would help us gain more insights,” said Phiri.

Cyber 9/132 is annual competition involving cyber security university students at undergraduate and postgraduate levels and this year it was held Cape Town, South Africa, between September 28 and 29, 2022.

Apart from the rankings, outstanding teams also won some awards and here too MUST was the dominant force.

Best Decision Document award went to Cyber Technophiles of MUST; Most Creative Policy Response went to Cyber Elites of MUST; Best Oral Presentation went to Cyber Warriors of MUST and Most Improved Team went to DSSo5 of Tshwane University of Technology. Here, of the four awards up for grabs, MUST scooped three.