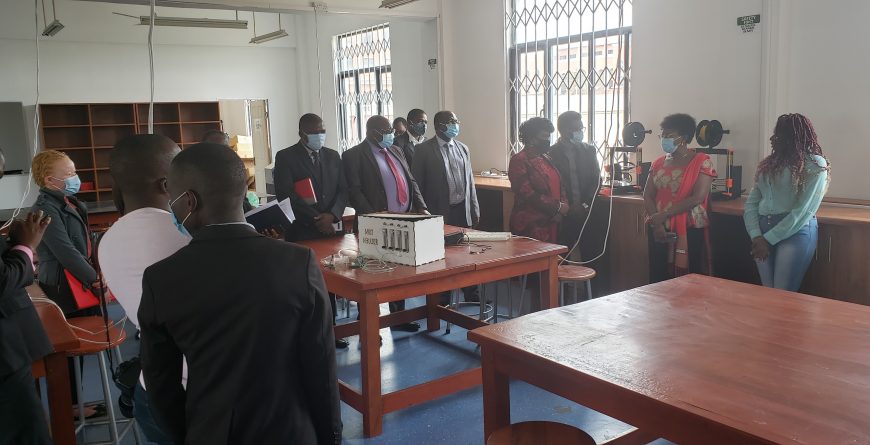 Minister of Education, Honourable Agnes Nyalonje on September 23, 2020 expressed satisfaction with the proactive approach the Malawi University of Science and Technology (MUST) took in responding to the Covid-19 pandemic.

The minister was told during her tour of the university that immediately it was known that Covid-19 would be with us for long, MUST established a taskforce to brainstorm and guide the university’s activities.

“When we announced the reopening of education institutions, some were calling me asking ‘what do we do’ but for you, you had already laid down steps of what needed to be done. Your students were already in second semester through e-learning and I am told the reopening only meant continuation of the same but now with blended learning as you added the face to face aspect,” said Nyalonje.

The minister also hailed MUST for focusing on technology, innovation and entrepreneurship, saying the fact that students were involved in coming up with innovations around Covid-19 was commendable.

“Let us allow the youth to experiment with their ideas and support them. As a minister, people are asking me about what big thing I will bring to the ministry, it may not be as big as infrastructure, I want us to change the way we do things. For me that is the big thing. Only if we realized and did our business differently, that would be a big thing for me,” said Nyalonje, adding that MUST had shown that it was doing business unusual.

The minister, who was on a tour of higher education institutions, among others, visited MUST’s teaching hospital, lecture rooms, laboratories, library and engineering workshop to appreciate what is there and some of the challenges that require her ministry’s support.

The minister, and her entourage, was also briefed on the activities MUST has undertaken from the time government closed all education institutions to-date when students in their third, fourth and fifth years of study have been called back on campus.

In her remarks, Vice Chancellor Professor Address Malata thanked the minister for visiting MUST.

“We are encouraged by your visit. It gives us energy to do more. We have done what we have done amid challenges as we lost two of our senior colleagues during this Covid-19 long break and last week we held a memorial for them,” said Professor Malata of the death of then University Registrar Dr Tarsizius Nampota and senior research fellow Robert Mkandawire.

The Vice Chancellor said meanwhile the university has honoured Dr Nampota, who was among MUST’s first three employees, with a scholarship for a student that demonstrates leadership skills in his name.

“So we will have the Dr Nampota Scholarship going to a second year student every year. And another Robert Mkandawire Scholarship will go to a second year student who demonstrates innovation. Both students will be supported with tuition fees from second to final year. Bothe scholarships will be funded by the MUST Endowment Trust Fund. As one of the pioneer staff, we have also named one of the hostels for male students after Dr Nampota,” said Professor Malata.

Usi hails MUST for industry