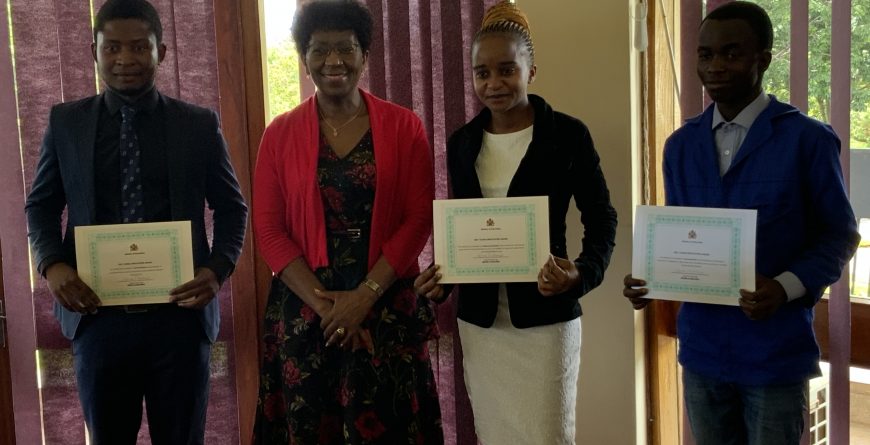 Out of 21 entrants and out of three overall winners for the Ministry of Education organized Young Innovators Awards, the Malawi University of Science and Technology (MUST) got two awards.

Dumisani Namakhwa and Astonie Mukiwa’s innovations were two of the three that won K500,000 and a certificate each.

Minister of Education, Honourable Agnes Nyalonje presided over the award ceremony at the Ministry’s headquarters in Lilongwe on January 5, 2022.

In her remarks, she said Malawi’s population is youthful and with the ideas that the youth have, the country can only get the best out of it by creating platforms for the young ones to showcase ad get their ideas scaled up so that they can become solutions to national problems and challenges.

“However, I have lately noticed, and even here, that focus is on those youths who are in school or college. But I can assure you that even those who are out of school or have never gone far with education, have brilliant ideas and we need to find a way of supporting them to nurture their ideas and innovations,” said the Minister.

The awards are a product of the newly established Directorate of Science, Technology and Innovation at the ministry, which is headed by Associate Professor Chomora Mikeka.

Apart from Namakhwa, who designed a low cost Internet of Things (IoT) based infant health monitoring system, and Mukiwa who created an online parliamentary sessions tracking tool that seeks to make business in the House paperless, the other winner was Kelvin Khauke from Lilongwe Technical College who has designed an electric powered maize shelling machine,

Nyalonje commended the young innovators for aligning their efforts to the country’s long term development blueprint that is MW2063, saying the innovations have potential to spur Malawi development.

She said Government, through her Ministry, was committed to supporting innovations as a way to boost socio-economic development in line with MW2063.

On his part, Mukiwa welcomed the award, saying it has motivated him to innovate more.

A MUST graduate in Computer Systems and Security, Mukiwa is currently working with the university as an intern in the Directorate of Research while Namakhwa, who was represented at the awards ceremony by a member of his innovation team, Ruth Mtuwa, just completed his Biomedical Engineering studies at MUST and is in Cape Town, South Africa, doing a masters in Mathematical Sciences.

However, three final year Biomedical Engineering students are working on Namakhwa’s innovation with the supervision of the innovator, Mtuwa and their lecturer, Richard Chilipa.

The two MUST awardees, said they will use the money won to improve on their innovations.

MUST to launch academic journal