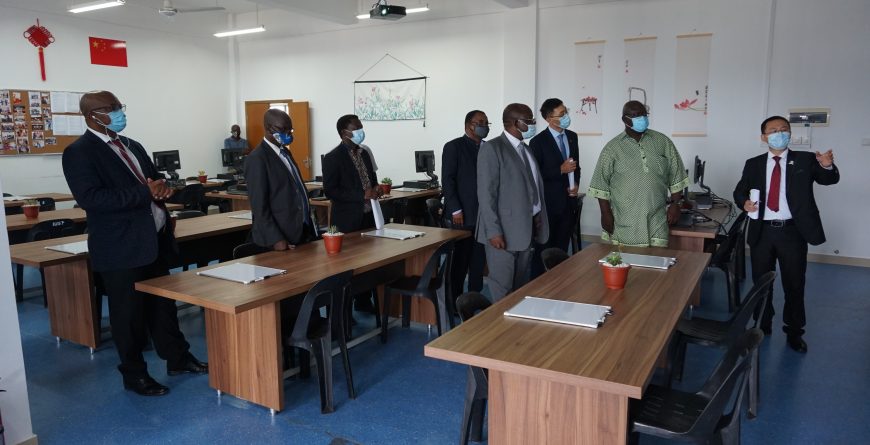 December 11, 2020 was an important day in the bilateral relationship between Malawi and the People’s Republic of China through the Malawi University of Science and Technology (MUST) and the Confucius Institute at the University of Malawi (Unima) as the latter launched a Chinese Language and Cultural Resource Centre at the university.

The establishment of the resource centre at MUST is in preparation for MUST’s roll-out of a Bachelor of Arts degree programme in Language, Communication and Culture, which will have modules in Chinese language and culture, among others.

In his remarks, You Yonghong, Chinese director of Confucius Institute (CI) of Unima, thanked MUST Vice Chancellor Professor Address Malata for her support to allow for establishment of a Chinese language teaching site at MUST not long after the establishment of CI at Unima in August 2016.

“In between, our Chinese lecturer here, Mr Liu Xiaolong, has registered some remarkable achievements. For instance, two students from MUST won the championship of Chinese Bridge Competition in Malawi in 2018 and 2020, some students have acquired the capability to join the Chinese Proficiency Test HSK Exams and two of them even passed HSK Level 3, which qualified them to apply for scholarships to study in China for their Master degree,” he said.

Mr You said currently there are over 300 million Chinese learning English because they believe in understanding languages that are key for accessing other countries and cultures.

As a global language, it was important for non-Chinese people to learn Chinese to know more about China and participate in its economy and culture.

“In China, the schools are open minded with foreign languages teaching and learning. For instance, in University of International Business and Economics in Beijing, the partner university of the Confucius Institute at the University of Malawi, there are 14 language programs in total including Japanese, English, French, German, Spanish, Greek, and so on.

“Chinese people are convinced that any human civilization or achievements of science and technology deserves to be learnt or understood. Therefore, 700,000 Chinese students started their journey of studying abroad in 2019 alone, which means they can speak fluently at least one second language,” added You.

“According to Chinese Ministry of Education, by September 2020, there were over 70 countries that had Chinese language as a subject in their general education systems, while more than 4,000 universities, 30,000 primary and secondary schools or institutes have set up Chinese classes all over the world. In total, the number of learners taking Chinese as a second language is over 100 million. In a country speaking fluent English, getting some skills of speaking Chinese is a good choice to expand the world,” he said.

“As such, the launch today of this Chinese language and cultural resource centre is a historical moment as it is the first of its kind in Malawi. Students will find abundant Chinese language learning resources. It will become a platform to promote cultural exchanges between Malawi and China,” said You, adding that, among others, the Centre will be holding online classes, culture workshop and academic conferences.

“People can come for reading or to have a cup of Chinese tea and listen to a piece of traditional Chinese music. Of course, the Malawian language and culture resources are also important parts in this Centre. Students will understand more about their mother land here. As CI, we will continuously support and upgrade the centre to bring in more excellent lessons and activities.”

On his part, MUST Deputy Vice Chancellor, Professor Jonathan Makuwira thanked the Confucius Institute for the resource centre.

“The idea to establish this resource centre was hatched just last year and this was a follow up to a successful completion of a new undergraduate programme, a Bachelor of Arts in Language, Communication and Culture, which has a component of Chinese language and culture,” said Professor Makuwira, adding this will make MUST the first university in Malawi to introduce formal Chinese language and culture in its academic offerings.

“We are glad that decorations and installation works for the Resource Centre are mostly done. Going through the facility, I noticed it has three zones. First is teaching, learning, and culture, which has a set of multi-purpose facilities for language lab, online classes, distance education classes, language and culture salon, and multimedia reading room. There are also many books about language and culture.”

Professor Makuwira said the second zone of culture exhibition zone is for cultural displays or science and technological materials both from Malawi and China to appreciate the histories, traditions, arts and modern societies of the two countries.

“The last zone is the office area, which provides space for lecturers to work, meet with visitors and attend to students. We plan to recruit some disadvantaged students to manage the Resource Centre and offer stationery services to students such as printing and scanning.

“I believe the resource centre will improve the level of language teaching and learning at MUST. We will open it to all students and staff except when there are classes,” said Professor Makuwira while thanking both MUST management and staff as well as CI staff for designing and provision of the resources.

The launch was jointly done with the official opening of this year’s Sino-Malawi Language and Culture Exchange Conference that was held in Blantyre on Friday and Saturday.

Speaking on behalf of Chinese Ambassador to Malawi, His Excellency Liu Hongyang, Mr You said the Embassy was pleased with the efforts by Unima, MUST and CI and scholars that attended the workshop for promoting cultural exchanges.

He said Chinese culture has a long history with its own unique traditions which attract great attention from all over the world.

“The Resource Centre will become a great platform for Malawian people to experience Chinese culture and learn Chinese. Our two countries have some similarities in culture. For example, Chinese people cherish the core values of ‘He’, which means kindness, harmony and peace and Malawi also has a long tradition of kindness and friendliness and is known as the ‘warm heart of Africa’, said You on behalf of the Ambassador.

He also noted the many differences in culture and tradition between the two countries, which according to Chinese President Xi Jinping, its diversity spurs interaction among civilizations and later promotes mutual learning and further development.

“Friendship between the peoples holds the key to sound state-to-state relations, and heart-to-heart communication contributes to deeper friendship. Since the establishment of our diplomatic ties 13 years ago, the bilateral relations between China and Malawi have maintained sound and rapid growth and yielded fruitful results. In the process, cultural and people-to-people exchanges have played an important role,” he said.

Malawi and China started holding the Sino-Malawi language and culture exchange conference in 2018 with the aim of exchanging ideas on culture, literature, language, history and others.