MUST staff innovates a solution to UN’s SDG6 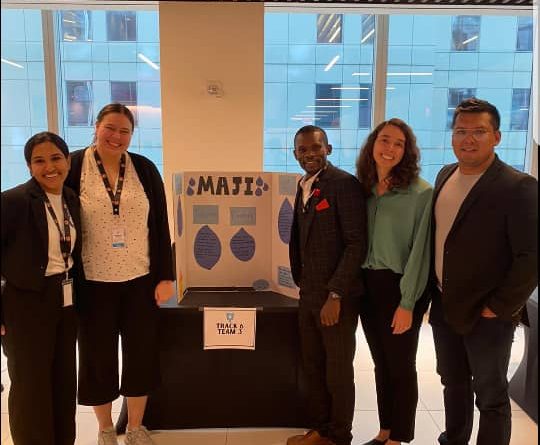 A lecturer at the Malawi University of Science and Technology (MUST), Stanley Chindikani Msiska, innovated a solution called MAJI at Unite 2030 Camp in New York, USA to address water challenges in developing countries.

Unite 2030 Camp took place between September 12 and 18, with 250 young change makers in attendance from over 61 countries to tackle challenges faced in the attainment of UN’s 17 sustainable development goals (SDGs).

Msiska is a lecturer in Chemical Engineering and currently a PhD student at Stellenbosch University in South Africa.

He was among the innovators selected from over 1,900 applicants to specifically work on SDG 6 (water and sanitation) at the Unite 2030 camp.

The Camp2030 is a six-day innovation lab by Unite 2030 (a global youth community) which is working to achieve the SDGs by the year 2030.

Unite 2030 believes that young people hold the key to achieve the SDG goals and solve the 17 global challenges which include poverty, inequality, injustice, climate change and water and sanitation.

According to Msiska, participants were divided into 36 teams and were challenged to find workable solutions to the 17 global challenges.

“In the teams, we worked together to innovate and create action plans addressing the social ills in our respective communities,” said Msiska who developed “Maji”, Tumbuka term for water, a digital platform (similar to Uber) that provides maintenance services to water systems in developing countries with Lilongwe as the starting point.

After pitching their innovations to a panel of judges, Msiska’s MaJi team won the 3rd place. The top three innovations will be supported by Unite2030 for implementation.

Msiska further explained that the web app will operate on smart phones, computers and for people without internet access, it would also be available via text messages. It is expected to be a job creation tool in the community, he added.

“This platform will offer community members side jobs as well as professional training since data collection will be involved in order to map the conditions of the water systems,” he said.

Talking about his experiences during the camp, Msiska said the opportunity was overwhelming, adding his innovation will help solve the problem of lack of sustainable maintenance of water systems in Malawi.

This year’s Camp 2030 linked up with the UN’s Global Goals week (18 to 26 September), which is an annual week of promoting action, awareness, and accountability for the SDGs.

Unite 2030 was founded in 2016 and over the last six years, it has brought about more than 1,000 collaborations and connections between young delegates, including local and regional projects addressing certain SDGs.

Through this camp Unite 2030 works to advance the young people’s skills, strengths and power to achieve a better and more sustainable future.

MUST appoints ODel and PG coordinators