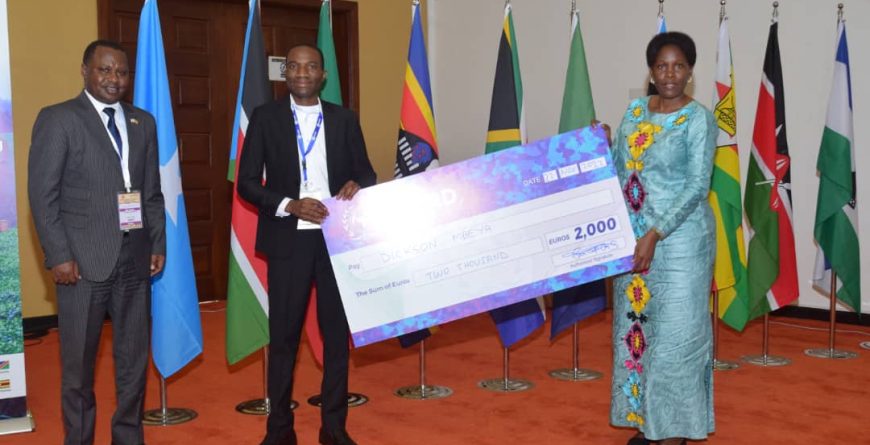 Dickson Mbeya, a cartographer and GIS expert working with the Malawi University of Science and Technology (MUST) on November 22, 2022 won an award during the 12th RCMRD Conference of Ministers and 56th Governing Council in Kampala, Uganda at Speke Resort Munyonyo.

Mbeya emerged winner in the Forestry, Protected Areas and Wildlife category with his submission titled “Status of Malawi’s Protected Areas”. He walked away with prize of 2,000 Euros and a one year Esri ArcGIS license for personal use.

According to the organisers, there were two themes for this year’s competition, namely Terrestrial (Related to Planet Earth Land) and Marine (Related to the Oceans and Blue Economy).

The competition had three categories with each category winner carting home 2,000 Euros.

Letsekha Mafereka (Lesotho) was the Overall People Choice Winner and walked away with 4,000 Euros after amassing the highest number of votes from people based on the five best entries identified by the judges

“I am very excited that I have won in this category. I thank God for His grace and favour. I also thank everyone that supported me along the way, either by voting or encouragement,” said Mbeya from Uganda, adding the award means a lot to him.

“It has made me realise that my GIS and Mapping expertise is not just locally recognised but it has a regional recognition too. To be one of the winners in a competition that attracted 1,760 entries, a competition that had 25 African countries participating, is something worth celebrating,” said Mbeya.

Through the competition, Mbeya said he has acquired knowledge and developed skills relevant for his profession and he will ensure that they are applied in his work and academic pursuits.