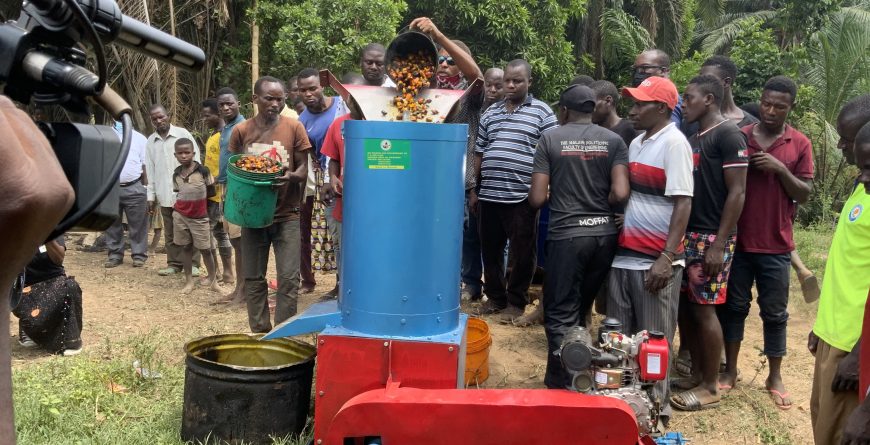 Malawi University of Science and Technology, through the Directorate of Research, Postgraduate Studies and Outreach and the Bingu School of Culture and Heritage, on December 18, 2021, supported cooking oil producers at Iponga, Karonga with a modern crude oil processing machine.

The community members produce the cooking oil from palm tree fruits and were using traditional and crude methods to process the oil, which was both inefficient and ineffective.

The team could only produce eight litres per day yet the new machine can produce 1000 litres within an hour and extracts more oil from the fruits than the old method.

Speaking at Iponda School ground during handover of the equipment, the university’s Director of Research, Dr Alfred Maluwa, said the support was aimed at entrenching a culture of industrialization among local communities to increase efficiency in production.

“We were approached by Ministry of Trade and Industry then to explore how to modernize processing of cooking oil to increase production in Malawi. The genesis was that Malawi continues to import cooking oil, thereby making it very expensive on the market, yet the country has the requisite raw materials such as soya, groundnuts and palm,” said Dr Maluwa.

“We realized that all that was needed was to improve on the production processes by making them less labour intensive and more efficient. The overall goal was import substitution. In so doing, we would also be creating jobs and have more affordable local cooking oil. Our challenge in all this was the crude processing methods and that is why we brought this machine.”

Dr Maluwa added that apart from realizing low production from the palm fruits, the old methods could also not crash the palm seed, which the farmers would later throw away or sell raw to foreigners for a song. The palm seed can be crashed to make oil and seedcake which is used as animal feed.

“The machine we have brought brings more efficiency and is not labour intensive which will allow the producers to produce the oil and also work on other economic activities. However, this is just the beginning because next on our agenda is to come up with another machinery for crashing the seed so that we benefit from both the palm fruit and seed,” he said.

In his remarks, Traditional Authority Mwakaboko thanked MUST for deciding to work with communities.

“Previously all counselling across sectors of economy and development came from foreigners yet Malawi has capacity to come up with its own home grown solutions to its challenges. This is why the coming of experts from MUST to work with our people is very welcome,” he said.

The chief said the processing method that was being described as inefficient and labour intensive, was actually an upgrade from what their ancestors were using.

“For us, this was a modern method of processing the palm oil because our forefathers were using bare hands and we at least had some drums and some form of mechanization. But your coming shows that with technology, we can always strive for more efficiency,” said Chief Mwakaboko.

He said with the new equipment, his people will be producing more oil and making huge profits.

“Be assured that the machine is well received. For the beneficiaries, let us realise and appreciate that this is our equipment and meant to support us. We need to won it and look after it well so that it benefits us for many years. They have talked about bringing in another machine and if we mess up with this one, I doubt if they will have the courage to bring the other one,” said the chief.

According to University Registrar, Alfred Chinombo, MUST believes that science and technology should go beyond the laboratory or school if it were to benefit communities and the country.

“We hear there are some women who use the oil for soap production, for example. These can be supported through research to improve quality of the soap. We can also look at how to substitute the salt that is used in the cooking oil production process which is imported. We want to make sure this industry grows so that it can create more jobs, especially for women,” said Chinombo, while thanking the various partners from a good working relationship on the project.

Among others, MUST is working with the district council, the traditional leadership under Mwakaboko. The project is funded by the Royal Academy of Engineering from the UK through Higher Education partnership in Sub Saharan Africa (HEPSA) Project.