MUST takes on board community innovators 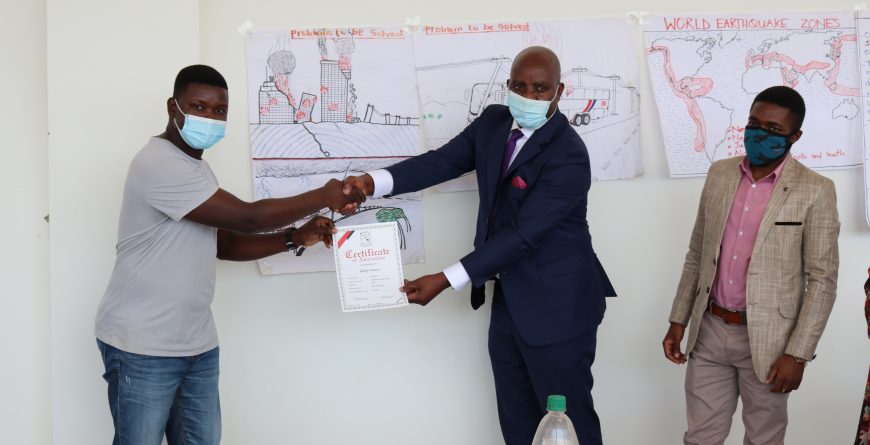 The Malawi University of Science and Technology (MUST) through its Institute of Industrial Research and Innovation (MIIRI) on April 16, 2021, admitted three youths into its Community Innovation  Programme where they will nurture their ideas to commercialization.

The scholarship support will be through mentorship, coaching, business plans and research around their innovations. The innovators will be attached to the university and will work under the guidance of expert mentors in their respective areas of interest.

Kondesi will be working on how to improve his electronics related innovations that include making of electronic gadgets and his radio station; Ten is working on what he calls human powered nebulizer; and Jere is working on a switch that can respond to disasters and cut off power in a building or area to prevent fires caused by electricity in times of earthquakes, storms and other related disasters. He calls his innovation D.I AutoQuake Switch.

According to Director for the MIIRI, Dr David Mkwambisi, the three are first incubates under the programme and more will be recruited along the way.

“Under the programme we have launched today, we want to diversify and cast our net wider by reaching out to those Malawians who have very good and innovative ideas but they lack support. These are youths, who irrespective of their education levels, have brilliant ideas that lack support to realise their full potential.

“As a university, we will put them under expert mentorship, these are professionals in their respective fields. For example, the radio station innovator will work with our university experts in telecommunications and sound engineering, ICT and physics who will do the research around his works and advise on maximizing for efficiency,” said Dr Mkwambisi.

He also said the English language proficiency will not be a barrier when considering candidates for the programme as the mentoring can be done in local languages where the innovator is not comfortable with English.

In a separate interview, Vice Chancellor for MUST, Professor Address Malata said: “Malawi has had innovations with potential to contribute towards national development but they died natural deaths because they lacked support. You do not expect the innovators to have the ideas and then resources to develop their ideas through all the steps required to commercialization”.

“This is work that should be done by those with resources and technical know-how to improve on the ideas and that is what MUST through the MIIRI will be doing”.

“These innovators have been taken on board and are on a scholarship. If need be, they will be working on campus either full time or part-time depending on the nature of their innovation. Interested community innovators need to apply for selection into the porogramme and the criteria will be based on the relevance and novelty of their idea,” said Dr Mkwambisi, adding that the initiative is being done in partnership with Ministry of Industry.

“The Honourable Minister of Industry, Roy Kachale Banda visited us and in our discussions, we realized that we had some areas of common interest and agreed to collaborate on such activities. This is one area where we have collaborated and there will be more coming.”

Community innovators include those in schools either primary or secondary, in industry, and communities who have no direct attachment to any research centre or university.

The MIIRI has thus called on the media to help MUST in exposing innovators and linking them to the university for support, saying some innovators may not know about this support.

Meanwhile, MIIRI is part of the Kamuzu Academy and National Commission for Science and Technology organized Science Fair where top innovations will also be taken on board for nurturing and mentorship.