MUST, TEVETA partner to promote innovations 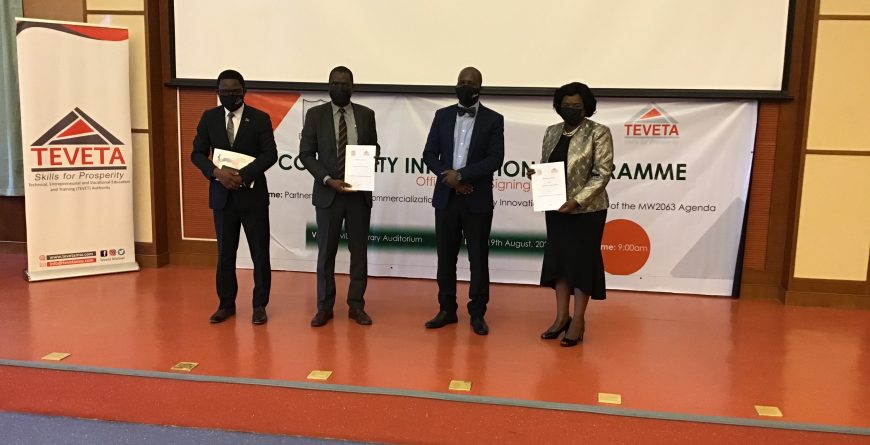 Malawi has a high population of unemployed young people yet some of them have very innovative ideas, which are being taken away from them without much benefits to both the individuals and the nation.

Taking cognizance of this, Malawi University of Science and Technology (MUST) has partnered with the Technical, Entrepreneurial and Vocational Education and Training Authority (TEVETA) to identify and train community innovators so that their innovations can be commercialized.

At the signing ceremony of their memorandum of understanding (MOU) on August 19, 2021 at MUST Campus, Vice-Chancellor Professor Address Malata said the initiative was aimed at producing skilled workforce that would support and advance the MW2063 industrialization agenda.

“This partnership comes at an appropriate time for the nation, more especially as we look at science, innovation and technology as a vehicle for advancing creativity and design, particularly through commercialization of community innovations programme.

“The programme has been designed to make sure that MUST and TEVETA are working jointly with district councils in identifying innovations that can be supported and later commercialized,” she said.

Already, the University’s design studio is training young innovators from various communities, who showcased their innovations to the invited guests that included Dr Thomas Munthali, Director General of formulators of the MW2063, the National Planning Commission (NPC), as well as Directors of Science and Technology at Ministry of Education, Dr Chomora Mikeka and Director of Technical and Vocational Training in the Ministry of Labour.

One of the young trainees impressed the guests with his innovation which can trigger off power from an Electricity Supply Corporation of Malawi (ESCOM) transformer if one pole falls off during a rainstorm or any accident, thereby cutting off power from buildings in a bid to avoid fire through electrical ripple effects.

The guests were told that ESCOM has already visited MUST to appraise the innovation to technologically advance it further.

Another young man from Kasungu innovated a portable electrical powered water dispenser and releases water using a sensor after he noticed that during these trying times of Covid-19, people are at a risk of contamination as they wash their hands by opening and closing taps.

Through the training with MUST, the innovation has been advanced to be operated by a rechargeable battery that can last longer.

There were several other innovations on display at the design studio which would be nurtured to commercialization and patenting in the innovators’ names for their benefit.

TEVETA Acting Chief Executive Officer, Modesto Gomani, said there were many other innovators in Malawi’s rural communities who lack capacity to patent their work.

He said through the partnership with MUST, they will continually engage with various stakeholders, including those from the local communities, industry and government to grow and sustain the innovations together.

“With innovativeness, as one of our values, we will strive to promote creativity and adoption of new technologies across the country as our commitment to participate in attainment of the MW2063.

“The MW2063 agenda advocates for industrialization and at the time recognizes the need for promotion of home-grown technology designs, let alone education programmes that promote this from early stages of learning.”

Gomani gave an example of the old-age innovation in the rural areas of the local lamp called ‘Koloboyi’, which was simple but many of the most learned citizens of the country used it profitably to study at night and achieve their academic dreams.

He also talked of William Kamkwamba, who harnessed the wind and created a windmill for his community’s irrigation system. Kamkwamba’s innovation attracted global attention that won him a scholarship to the US and has travelled across the globe as a celebrity.

In his remarks, Dr Munthali said it was an honour that MUST and TEVETA were harnessing the MW2063, saying the initiative would deliver on the common aspirations of an “inclusively wealthy and self-reliant industrialized nation”.

“Our industrialization shall be driven by research, science and technology development in order to become and remain productive, innovative and highly competitive at regional and global levels. Our education system shall be re-designed to respond to the current and future skill needs of the manufacturing industry and sectors that support it. Advances in science, technology and innovation shall be promoted and leveraged,” he quoted the MW2063.

Dr Munthali added that science, technology and innovation (STI) is a “key enabler to Malawi’s vision of an inclusively wealthy and self-reliant nation, anchored by three main inter-linked pillars of Agriculture Productivity and Commercialization, Industrialization, and Urbanization”.

“We will never be competitive amongst global economies if we ignore STI. It is, thus, good to know that MUST will be taking TEVET graduates to advance their skills. We are also working closely with Ministries of Labour and Education to conduct a skills audit so that we guide our institutions of higher learning and other training institutions on the skill sets required to deliver on the MW2063’s three pillars and seven enablers. I am sure that TEVETA and MUST will be an important stakeholder in this noble task,” Dr Munthali said.

The initiative’s implementing team is being led by David Mkwambisi, who is Director of MUST Institute of Industrial Research and Innovation (MIIRI).–MaraviExpress

MUST to support Karonga oil producers