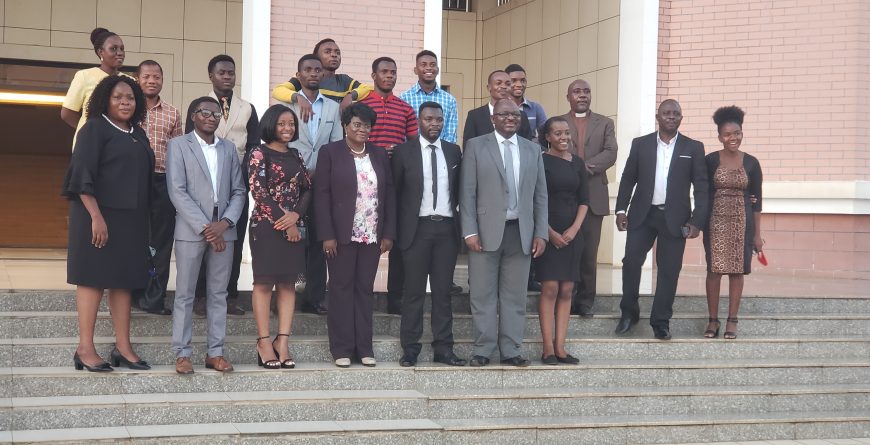 Newly elected members of the MUST Students Representative Council (MSRC) on Friday held a swearing in ceremony to mark the official assumption of their respective offices.Administered by university chaplain, Father Roy Makupe, in the presence of Vice Chancellor Professor Address Malata, Deputy Vice Chancellor Professor Jonathan Makuwira and Deputy University Registrar Martha Sambani, one by one the student leaders pledged to abide by their constitution and sought God’s guidance.In his speech, incoming MSRC president, Lampard Kamanga, was thankful to the student body for the trust shown in his team through the elections.“We know the students want to see change in a number of areas but that change cannot be realized through one person. We need to work together, the student body, MSRC and management. So let us all be ambassadors of this change,” he said.Dean of Students’ Affairs, Saizi Kimu, whose office manages the students’ elections, thanked management through the presence of the VC, DVC and DUR during the wearing in ceremony, saying this demonstrated that management take issues of students’ welfare seriously.Kimu also congratulated the new MSRC leadership and pledged to work with the team for the betterment of students’ issues.Professor Malata reiterated her management’s open day policy where students are welcome for discussions whenever there are differences.“Demonstrations or ultimatums will not solve any problems. In fact, experience has shown that they only create more problems. So let us resolve our differences through dialogue,” she said while reminding the MSRC leadership that they are first students and as such, academics should be their priority.“It is sad when we have members of MSRC being withdrawn on academic grounds because they spent most of their time working on student leadership issues. When it comes to academics, we will treat you as any other student so you better remember this and focus more on your academic life because that is what you came here for,” she added.The student leadership was also urged to either maintain or surpass the high standards set by their predecessors.“There will be pressure from fellow students and management for you to take certain decisions and your success or failure will be determined by the way you handle such pressure. But be assured of management’s support because we want you, as the bridge between students and management, to succeed,” said Professor Malata.The Vice Chancellor also challenged the new team to finalise their constitution and initiate innovations.“In some universities, students’ unions have established companies and they win tenders at the university to supply services and products. You can do the same here. For example, you can establish a cleaning company and have needy students work part-time as cleaners and earn something. It is surprising that in Malawi students do not want to work part-time on campus on nearby institutions despite their economic challenges. Elsewhere, this is a norm,” said Professor Malata, adding that the coming of Covid19 has changed the way people do some things hence the need for the students to embrace the various changes that will be introduced to their academic life.The new MSRC leadership is as follows: President is Mr Kamanga; Vice President is Mr Charles Saiwala; General Secretary is Alfred Levison; Vice General Secretary is Ms Alinafe Banda; Treasurer is Mr Bashil Stambuli; Speaker is Mr Innocent Misinde; Director of Social Welfare is Ms Emma Mwenechanya; Deputy Director of Social Welfare is Ms Saffie Chirambo; Director of Sports is Mr Kelvin Pemphero, Director of Women Affairs is Ms Deliwe Chibaya; Deputy Director of Women Affairs is Ms Samantha Mandere; Director of Entertainment is Mr Fashion Fashion; Director of Publications is Mr Caleb Mdalla; Director of Religious Affairs is Ms Annociata Chisale; Director of Academic Affairs is Mr John Mhango, and Director of Catering is Ms Gamuchirai Kabaya.The team emerged winners during elections that were held on October 6, 2020 which were done online through a system developed by MUST ICT team. The system allowed students who were outside campus to participate in the polls.