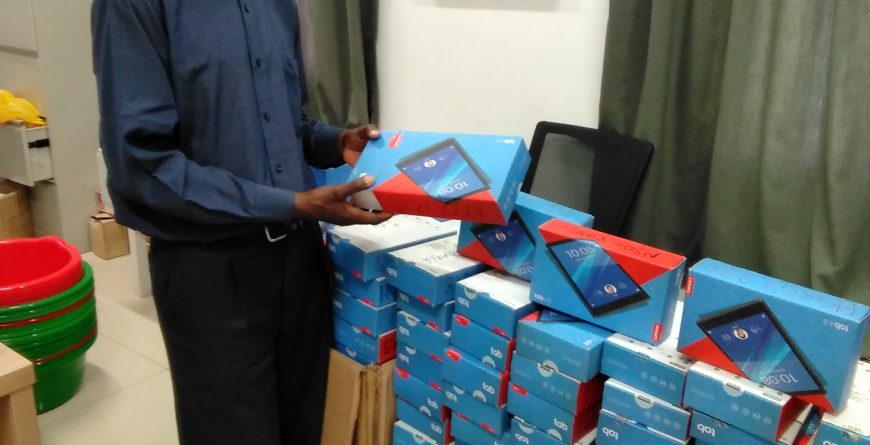 By James Mphande
The National Statistical Office (NSO) has given the Malawi University of Science and Technology (MUST) 200 Lenovo tablet phones worth over K31 million to enable the university make access of its academic services easier.
According to NSO Commissioner Mercy Kanyuka, during the 2018 national census they had around 10,000 tablets that they used, some bought with funds from DFID and others bought by the Malawi Government.
“The tablets that were bought using DFID resources were sent to Zambia to be used for their census and we remained with those which were bought with local resources and some of them are the ones we are giving out to those that sent us requests.
“Our understanding is that we cannot keep them idle waiting for the next census in 2028 as in between technology will be improving and they may be rendered useless so it is better that we donate them to those that can use them now,” Kanyuka added.
NSO public relations officer Kingsley Manda said they received requests from various ministries, departments and agencies and had to assess the requests before making the donations.
“when making the requests, the organizations were also telling us what they want to do with the tablets and it was only where we saw that the usage was in line with Malawi government’s socio-economic development plans that we would approve. But our approval to donate was only communicated after getting a go-ahead from the Public Procurement and Disposal of Assets Authority,” said Manda.
“When we were procuring these tablets for the 2018 census, we knew that they could not be used for the next census in 2028 as they would have expired so we came up with a disposal plan and what we are doing is in line with our disposal plan. However, we are not donating all the 5000 tablets that were bought with Malawi government resources, we are retaining some for use in household and other surveys data collection.”
Receiving the donation, MUST Vice Chancellor Professor Address Malata thanked the NSO for considering the university.
“We are really excited and thankful for this. The donation could not come at a better time than this when we are looking at introducing online teaching and learning, especially for our final year students so that the COVId19 challenges should not affect their education.
“As such, we want to upload content in these tablets and make them accessible to our students so that they can continue with their education despite the COVID19. We want NSO to know that we will take very good care of the tablets because much as they are to be used by students, they remain the property of the university,” said Professor Malata.

MUST joins Covid19 fight with automatic water and soap dispenser

Mutharika impressed with MUST Covid19 innovations